Do it yourself, My house

I thought I was immune to poison ivy after a childhood of dirt rolling and naturing without a single case; I was positive that I could not get it. So when I started hand excavating the front hill of my house I wasn’t even considering the possibility of it. Coupled with the fact that I DID NOT SEE ANY poison ivy, AT ALL, it didn’t even cross my mind. Cut to one week later when I’m walking around looking like Jabba the Hut caught Leprosy (not cute), I was seriously pissed off.

The landscaping at my house was disastrous when I moved in, it was totally overgrown and looked like it hadn’t been touched for 20 years, so I decided I was going to take it on as one of my solo projects (also because every landscaper I surveyed about it, looked at it, and basically never called me again). So I came to terms with the fact that I was on my own and got to business. The difficult part about the landscaping at my house was not only that it was totally overgrown, but really the sheer scale of it. Normal people are like, “oh how cute, let me get a couple shrubs and plant a hydrangea…” and I’m all like, “Ok 66 linear feet, by 12, means 6 yards of mulch and 37 SHRUBS… that’s after I excavate the 12 feet of overgrowth, and dig the 37 holes and fill with a fertilizer mix, oh and the drought, have to factor in the drought, need granite cobble stones so a pallet of those at $1.75 a piece and I need 200 of those…” So, it wasn’t the easy peasy situation that my pinterest dreams are made of. Nevertheless I persisted…

At first I just had to clear the dead overgrowth, don’t have a lot of pictures but here is a good idea of what it looked like: 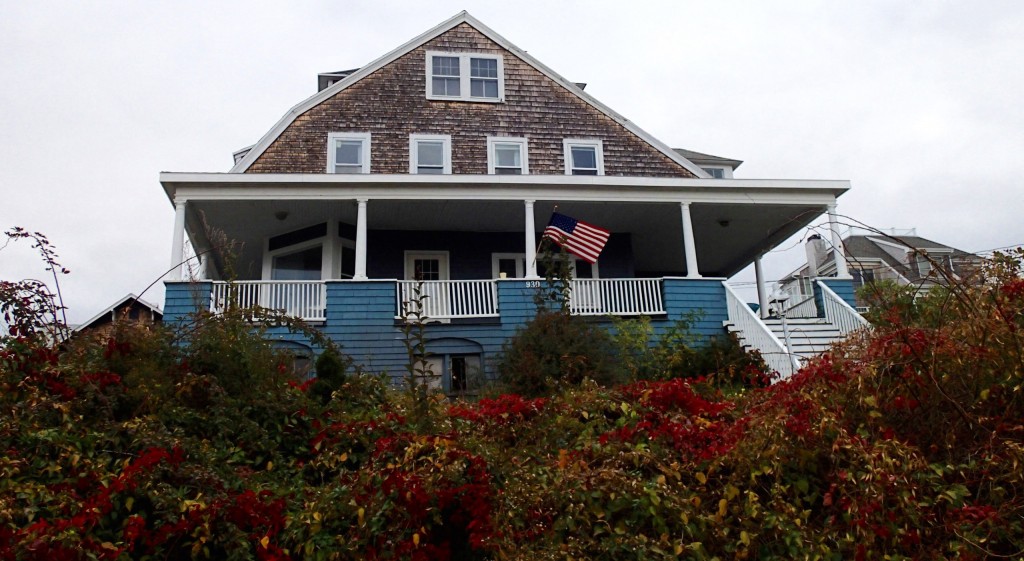 So given how serious the growth was, I had to get an excavator to first clear the space:

starting with a clean slate

Once it was cleared, I figured I was GOOD TO GO, no visible vines etc. so started digging those holes.  I have since learned that poison ivy doesn’t actually have to be visible for you to get it (real F**king cool). Apparently the oil of it, within the vines and leaves can spread onto other plants, onto rocks, onto gardening tools and clothing. So last summer I officially got it 4 TIMES, on my arms, face, one time DANGEROUSLY close to my lady parts, I am not kidding it was a NIGHTMARE. Poison ivy on your inner thighs is a new level of torture, you can’t even walk normally, TRUST ME… pure torture. Every time I thought “ok, I got this, I am fully covered in practically a HAZMAT suit,” gloves, long sleeves, rubber boots, whole nine… I STILL GOT IT.

I spent a large majority of the spring walking around with bandages taped all over my body to not scare away my clients. What’s worse; your real estate agent covered in opened wounds (barf) or covered in mysterious bandages?? I prefer the mystery… So after I planted all the shrubs (which looked oddly small once they were in – sort of a casualty of 66 linear feat of space) I decided I was going to weed mat the whole thing so no vines could grow up in-between all of my plantings. I weed matted at night because I was heavily medicated due to above referenced poison ivy and I couldn’t sleep, so no pictures really. Here is how that section ended up coming out;

Who knew I had a granite wall there?!

Why are these plants so tiny?!!!! They were much larger looking when I bought them.

So at that point I was finished with that project for the summer – cut to last week when I decided the top of this hill looked unfinished and started another project. I wanted the top of the hill (seen above) to look more complete, so I started edging out a new bed. 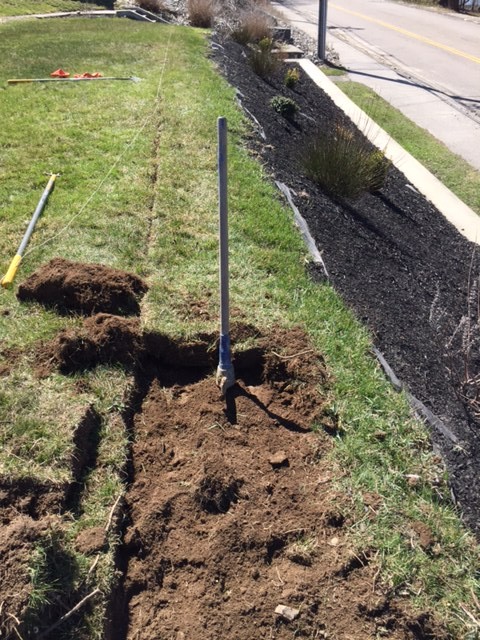 This seems like an easy task, but ripping up well established dirt might as well be ripping up cement. NOT EASY. Once I ripped up all of this grass I realized I had about a thousand pounds of grass with dirt attached to it to move somewhere which I hadn’t fully thought out…awesome. But what was in the grass roots?! Oh you know, just some more F**king poison ivy!!!! (face meet desk, desk -face, slam, slam, slam) Moving along… 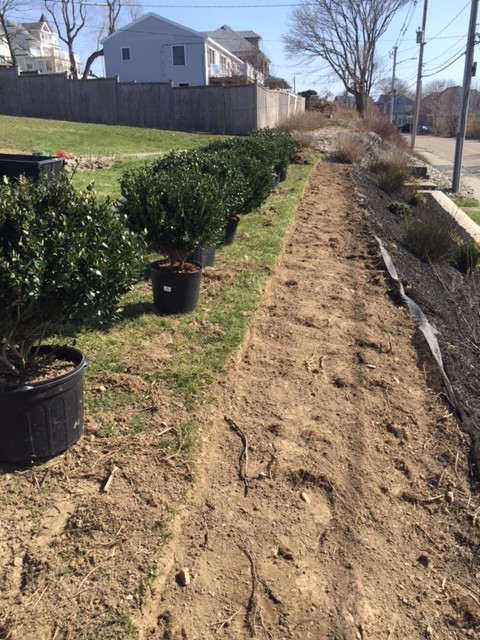 I got 21 more shrubs for the top, Japanese Holly, which looks similar to boxwood but grows faster. Boxwood is that super chic, great for a landscape architecture/style design plant but it grows and what I consider to be a glacial pace…I have no patience for this. If you have 20 years to watch shrubs grow, go for it, if not – pick something else. This is what weed matting looks like: 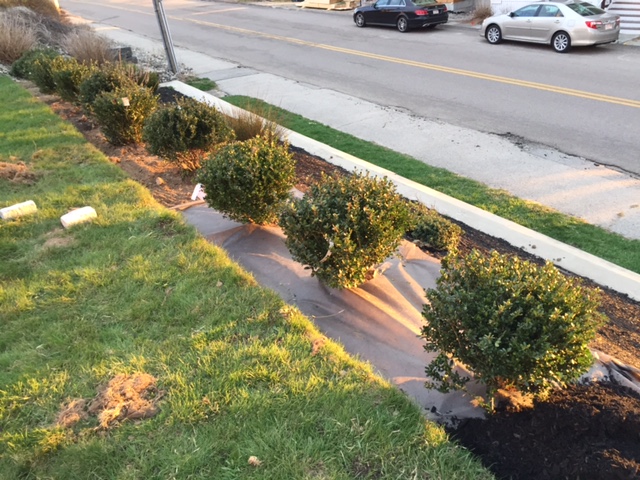 weed mat in between plants.

I bought a pallet of granite landscaping blocks to edge it all out and another 3 yards of mulch. After a lot of sweat, a jammed finger between granite blocks, and a moderate amount of blood (no tears), I finished the job. 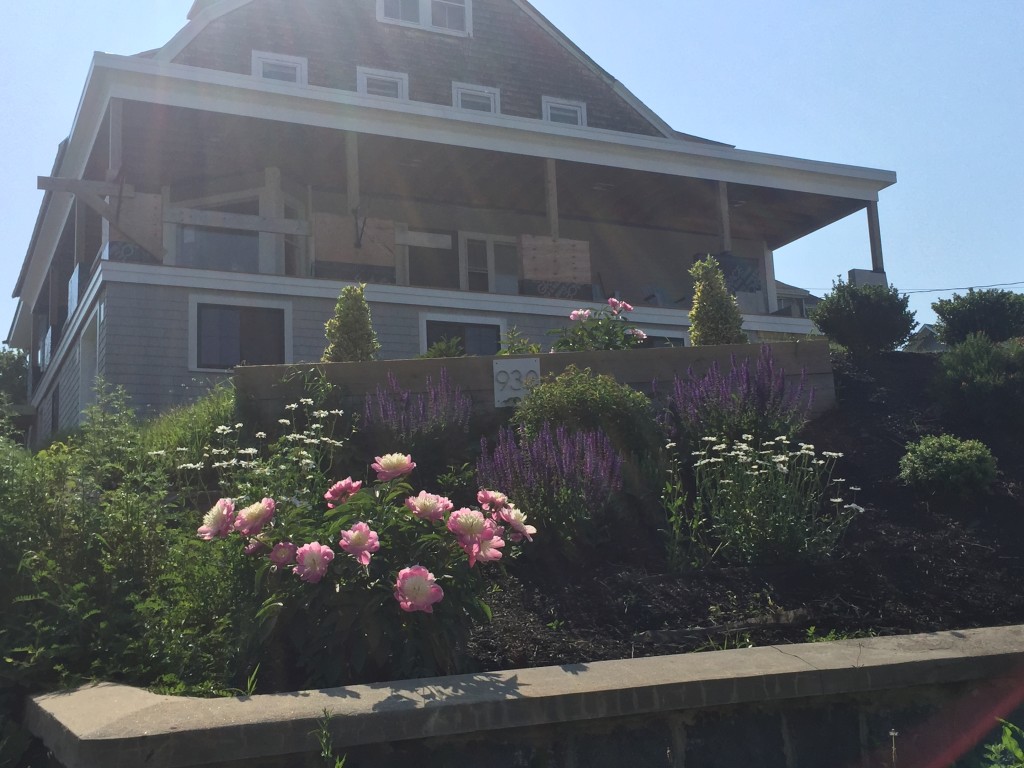 My Peonies in Full bloom 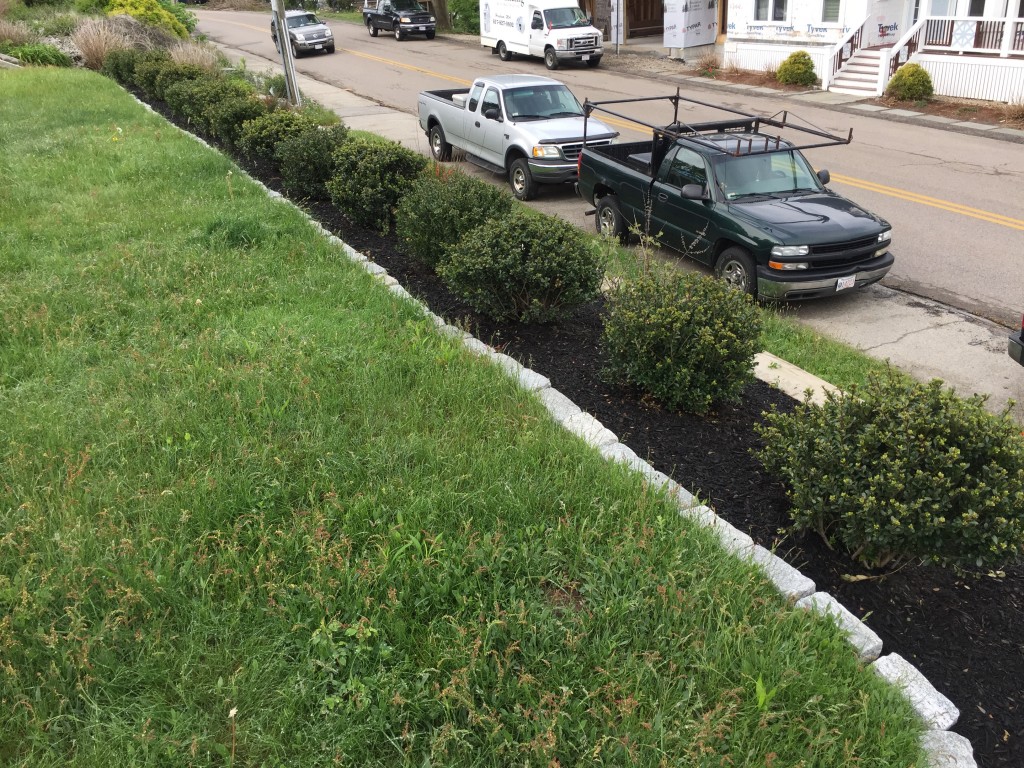 So in conclusion… hire a landscaper.

Quick update, have been super busy – yay! Just got a new listing in my hometown of Scituate, MA and got some sweet drone shots. So this is what it feels like to be a bird?!!! Suddenly feeling sad that I can’t fly…

Anyway, great single family listing on the street next to the one I grew up on, this is my hood!! 02066 for life! 🙂 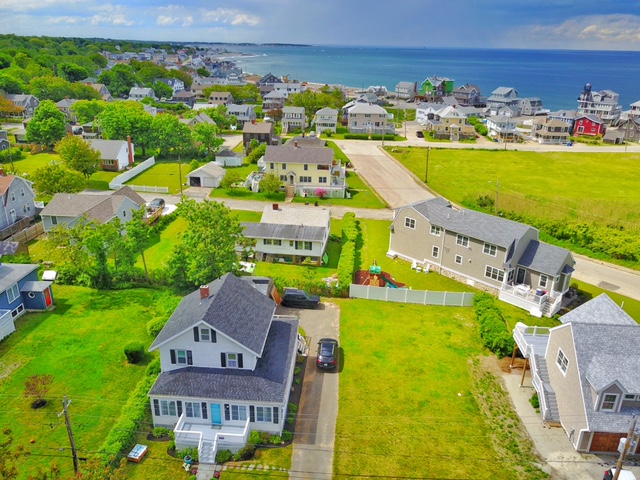 I spent my entire childhood on this beach <3 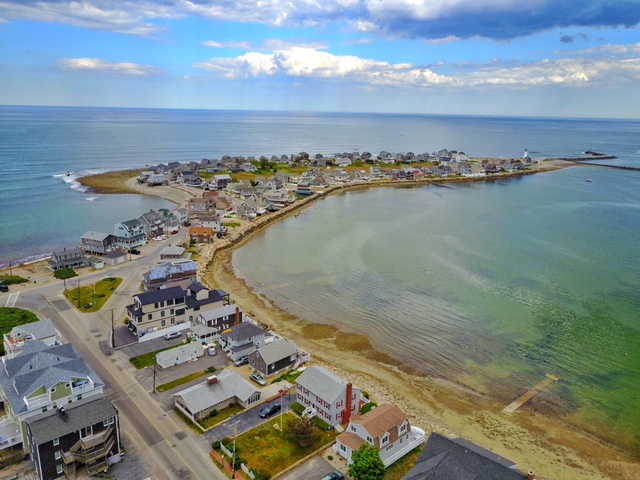 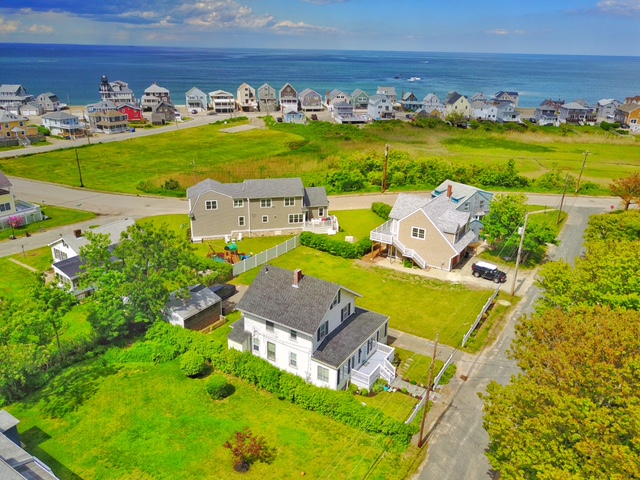 Was also lucky enough to book the super talented Brian Doherty to shoot the interior! He does some really amazing work, check out is website: http://www.briandohertypd.com

All interior photos by Brian Doherty: 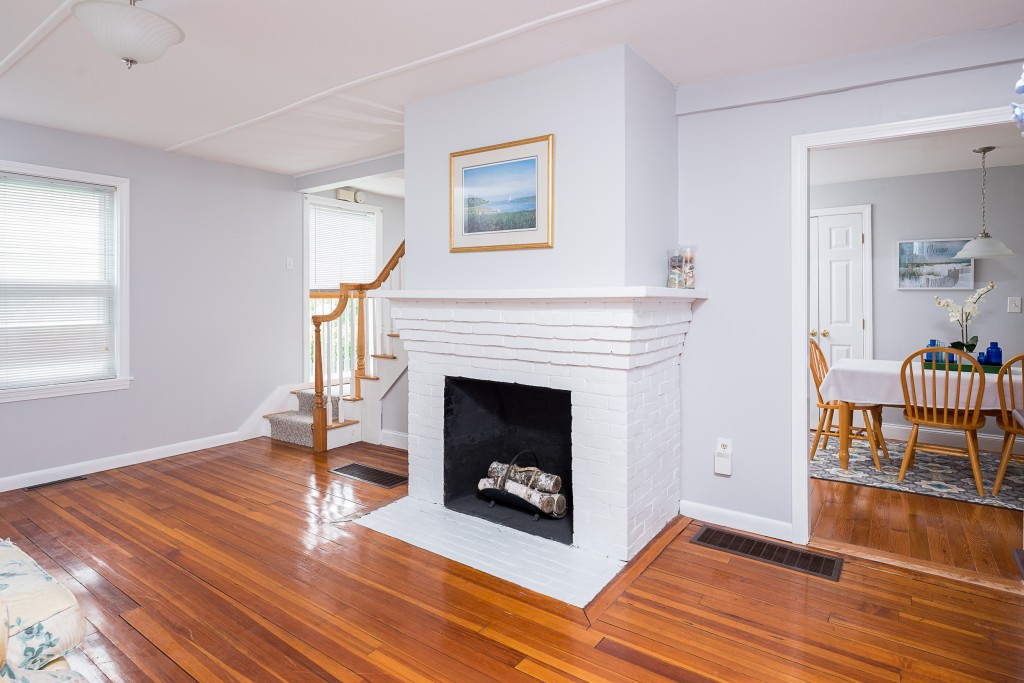 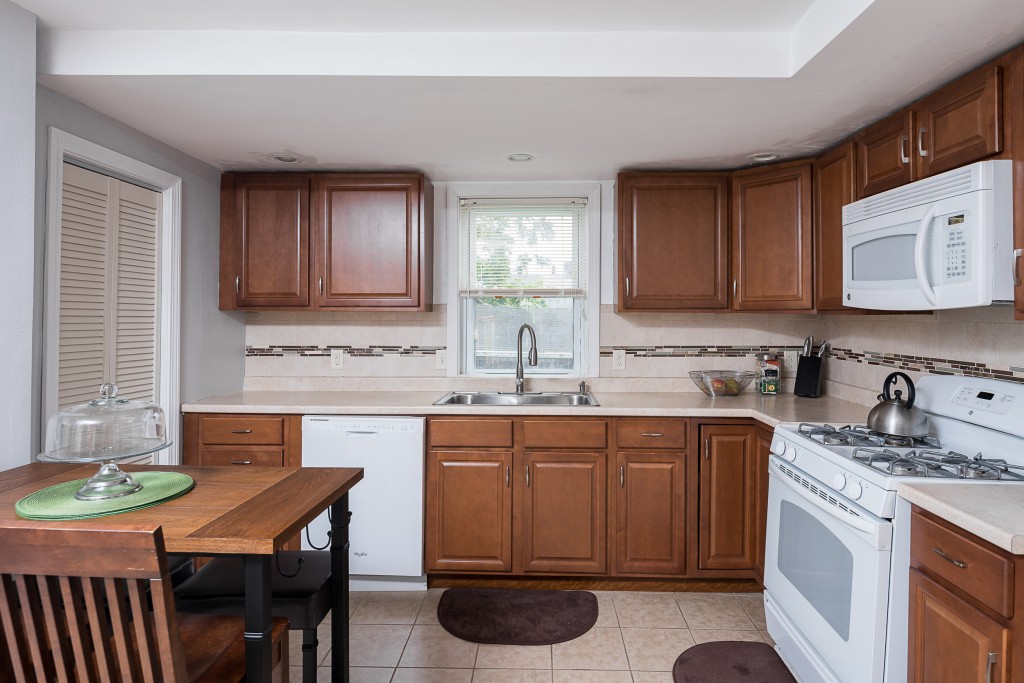 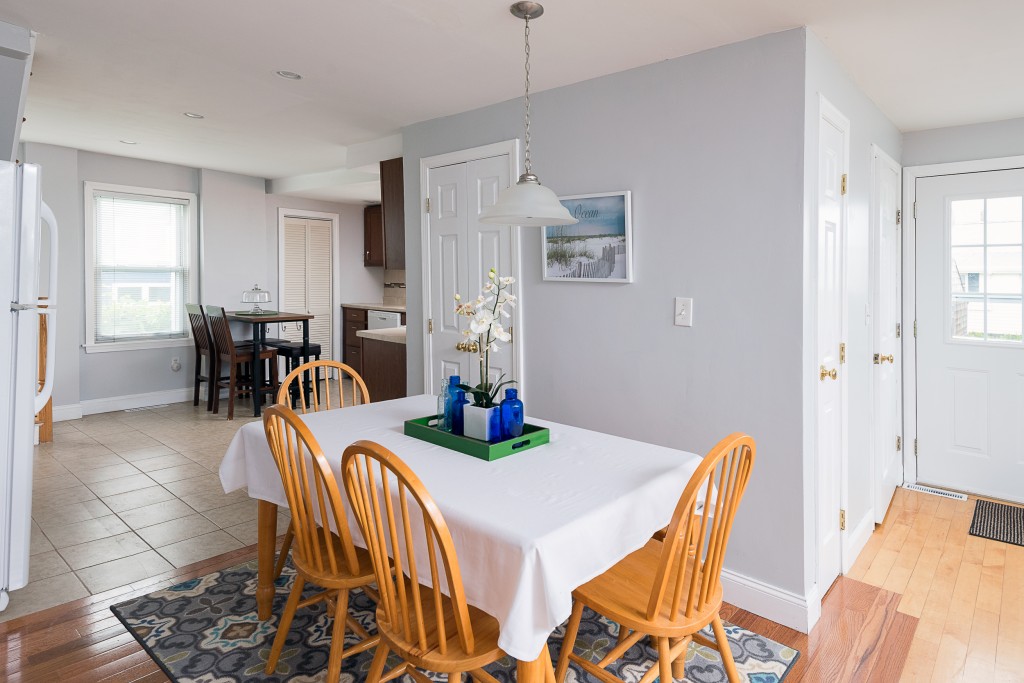 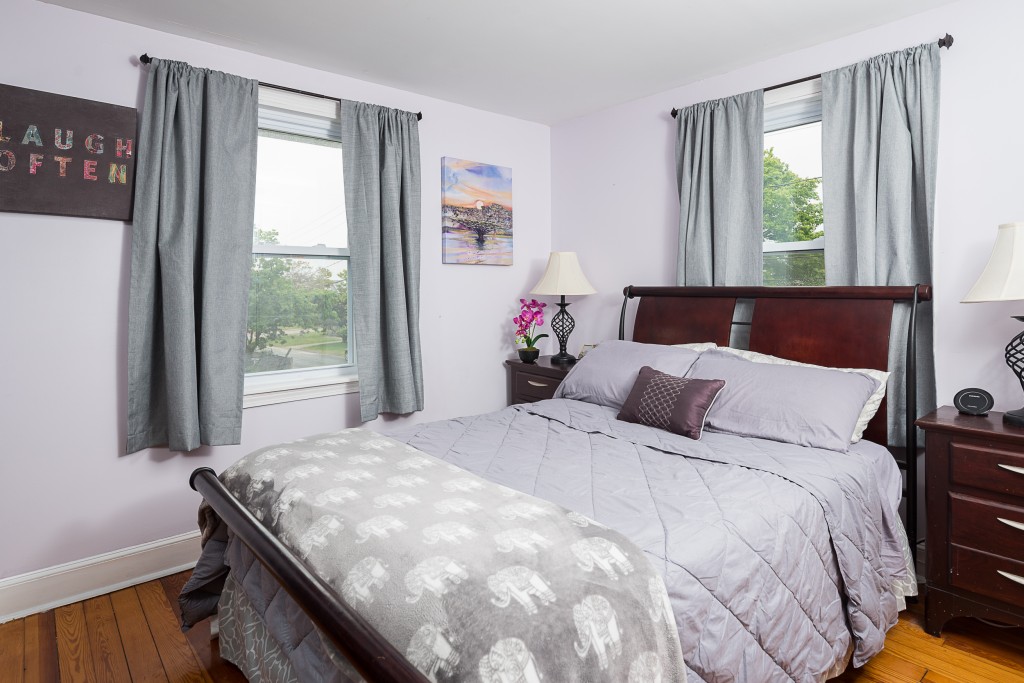