As you may know I am in the process of remodeling my dream house which is an old Victorian on the Ocean. It has turned out to be quite the project which is taking a long time to complete because I have a full time job, and no machine to counterfeit money in my basement. We took a break from finishing the front porch because our backyard was really steep and we wanted to level it out. A friend of mine from High School owns an excavation company out of Scituate, MA and came over and gave us a really reasonable quote to get the job done. Aside from leveling out the backyard we have had an ongoing battle with Japanese knot weed which is pretty much the devil and is an invasive plant species that took over the back yard.

My dad and steve trying to clear it out after Winter

After a serious battle against this invasive plant that was taking up 1/3 of our yard, it continued to come back – no matter what we did (we didn’t do Round up Or Chemicals because I don’t want them in my yard, google about it and decide for yourself but I am ALL SET with glyphosate death serum).

Since we were planning to excavate to level out the yard we asked our excavator to go down an extra 2 feet in order to get most of the root system of this bamboo out. This plant is INSANE, literally if you leave just a tiny section of root in the ground, and entire plant will grow back, it’s actually growing through our asphalt driveway.

When our excavator came he got to work taking all of the dirt that was contaminated with Japanese Knotweed and trucking that out of our yard, and then taking the steepest section of our yard that we wanted to level out and using that dirt to fill in the hole where the dirt had been removed. Then he leveled everything out – which took a few days to get properly angled. 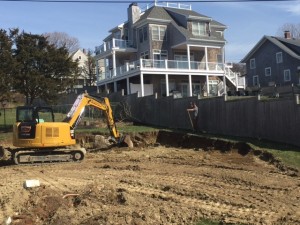 Taking out the hill 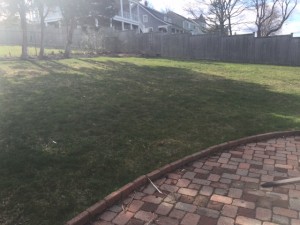 Before, hard to tell how steep it was 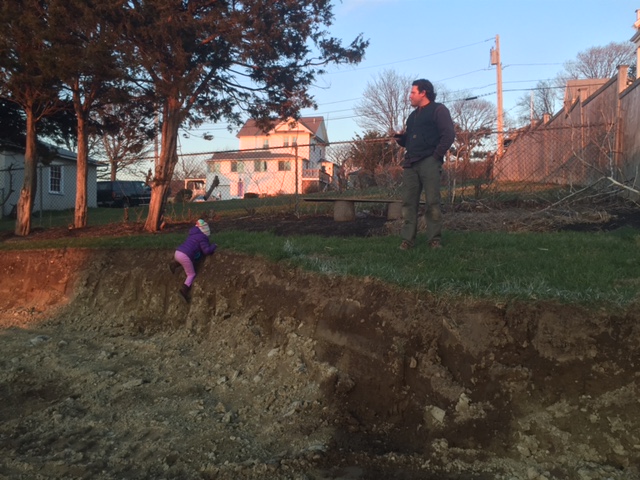 We ended up taking out about 4 feet of dirt from the steepest part of the yard in order to level it off. When you take out that much dirt naturally you have to put some sort of retaining wall in to hold the dirt from collapsing in on itself and shifting from the neighbors property. I looked at all kinds of possible retaining walls, there are so many beautiful ones to choose from, but obviously everything I really loved was WAY over budget. Fu*king budgets, always raining on my parade!!

Luckily our excavator who is great at this type of stuff, had an excess of boulders he had been collecting from other jobs. We were able to buy boulders by the truckload from him and do what is called a “dry stack wall.” Meaning, the rocks are places strategically to make a wall but there is no mortar or anything holding them together. Over time the dirt and grass seeps into the cracks and creates sort of a joint to hold the rocks back, hence the “dry stack.” The cool thing about this type of wall aside from the fact that it is more affordable that other masonry walls it that it reuses boulders that have not been altered which is a “green” alternative to quarried rock, and it provides a natural look. When you’re walking in the woods and see rock walls rom 100 years ago, those are dry stack walls, which have managed to remain pretty well enact.

Watching them build the wall was pretty cool as they had a strategic plan in place and picked each rock to fit into the correct space. I have to admit, when they first started I was like “Oh no, this is going to look like shit.”  I really didn’t have a lot of faith that my “retaining wall on a budget” was going to look like the beautiful walls I had been stalking on pinterest, but luckily I was wrong and it came out awesome. 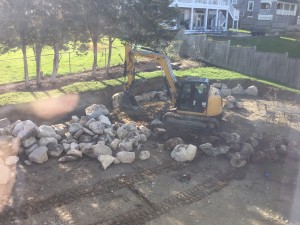 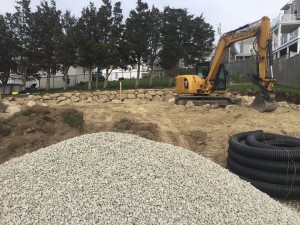 Tons of Boulders – delivered by the truckload.
Organized placing of each rock took some time. I walked around drinking wine and silently judging the placement of each and every rock.

Came home from work and it came out better than I thought! More to come on the back yard soon!